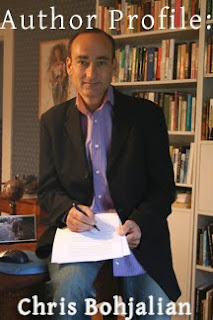 Chris Bohjalian, author of Oprah’s Book Club pick “Midwives,” chosen in 1998, has since been ever more prolific with his touching novels of family life. He lives in Vermont with his wife, a photographer, in a house that inspired his novel “The Hangman.” If you enjoy thought-provoking emotional reads, try one of these favorites:

Secrets of Eden (2010)
A literary thriller involving a murdered woman, her pastor, her family and other families like hers, “Secrets of Eden” explores grief and the things we keep to ourselves and our closest confidantes, no matter what their effect on others may end turn out to be. Bohjalian touches on the meaning of faith, and the controversy of domestic abuse, among other deep topics in this newest novel.
Fic Bohjalian WCV WAM WDB


Before You Know Kindness (2004)
A large family’s years of New England vacations are quite literally shot down, when one of the children accidentally fires a hunting rifle. This event sets in motion a court case and family trauma aplenty. While it looks like a dramatic novel, there are parts here that resonate with satire, especially those that involve PETA-lookalike FERAL.
Fic Bohjalian WAM WMB (Available as an e-audio book)


Trans-Sister Radio (2000)
Few, if any novels currently out handle the subject of transsexuals as though it is a normal situation. Bohjalian does this adroitly, with this novel of Alison, a pre-operative male-to-female transsexual, and how she falls in love with Dana Stevens, just a few months shy of her surgery. The author takes this highly-charged story and makes it a careful tale of controversy and love.
Fic Bohjalian WMB


The Buffalo Soldier (2002)
From the loss of two daughters to the gain of a foster son, “The Buffalo Soldier” deals with Bohjalian’s usual territory: family trauma, usually that motivated by grief and loss. Here, the story is about the Sheldons, whose loss of two daughters in a flood leads to the fostering of Alfred, a 10-year-old African American boy. Through Alfred’s research into the titular ‘buffalo soldiers’ of the Civil War, and the Sheldons’ infidelities, we learn about the meaning of marriage, the bond between parents and children, and the quiet insights of grief.
Fic Bohjalian WCV WAM WMB
BKC Fic Bohjalian RSV
Posted by Warren Public Library at 3:51 PM

How do you keep a people down? ‘Never' let them 'know' their history.

The 7th Cavalry got their butts in a sling again after the Little Big Horn Massacre, fourteen years later, the day after the Wounded Knee Massacre. If it wasn't for the 9th Cavalry Buffalo Soldiers, there would of been a second massacre of the 7th Cavalry.

I hope you’ll enjoy the novel. I wrote it from my mini-series movie of the same title, “RaPR” to keep my story alive. Hollywood has had a lot of strikes and doesn't like telling our stories...its been “his-story” of history all along…until now. The movie so far has attached, Bill Duke directing, Hill Harper, Glynn Turman, James Whitmore Jr. and a host of other major actors in which we are in talks with…see imdb.com at; http://www.imdb.com/title/tt0925633/

When you get a chance, also please visit our Alpha Wolf Production website at; http://www.alphawolfprods.com and see our other productions, like Stagecoach Mary, the first Black Woman to deliver mail for Wells Fargo in Montana, in the 1890's, “spread the word”.